My husband and I just got back from the fabled island of Maui, Hawai’i. We went to see humpback whales, sort of a continuation of our whale-watching trip to Alaska 18 months ago.Alaskan whales But we ended up enjoying much, much more.

The humpback whales in Hawai’i come from feeding grounds in colder waters, like the fjords of Canada, Alaska, and even Russia. But there are populations of humpback whales in the South Pacific, North and South Atlantic, Indian Oceans and even the Mediterranean and Red Seas as well.

Both in their feeding waters and their mating waters, humpbacks put on a show, diving and breaching. 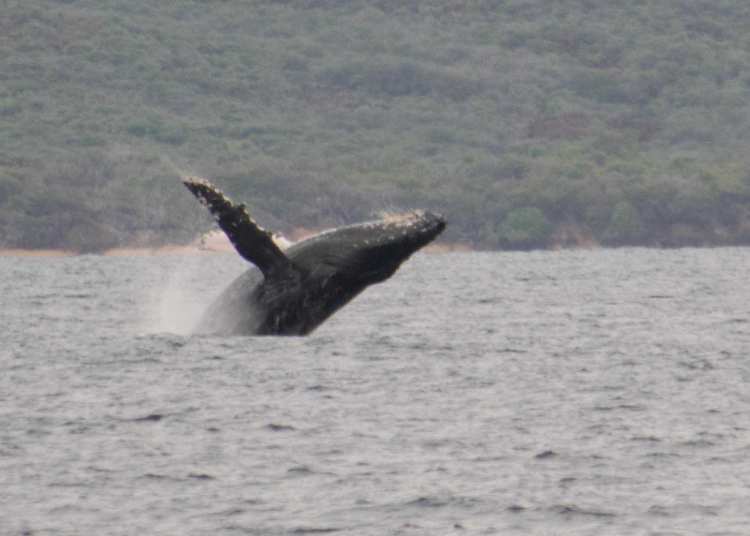 Humpback whales are baleen whales, that pull water into their mouths, then strain krill and small fish out with the baleen. But for their entire three-month, 6000 mile trip to Hawai’i and back to the Canada and Alaska, the whales live off their reserves of fat.

Humpbacks are found in the shallow straits around Maui every December through March.  The nursing mothers arrive first, then juveniles, then males. Pregnant females arrive last, having fed until the last moment. They give birth soon after they arrive. (Wild Hawaii Marine Life)

The non-pregnant females attract one to several suitors. One of the ways a female signals her interest to males is to raise her pectoral flippers in a wave.

Several males flock to the female, and compete to mate with her. Across the humpback whale population, for every female, there are two males. (Wild Hawaii Marine Life)

Because they don’t eat during their trip to and from Hawai’i, the whales can’t afford to stay in the Islands very long. Ninety per cent of humpbacks spend less than a month in Hawai’i before heading north again.

The females leave as soon as they are pregnant. They usually spend ten to twelve months pregnant, and one year nursing their young. The males hang around Hawai’i the longest, trying to mate with as many females as they can.