After giving it our all yesterday, my husband and I decided that we could hike the Wall, or we could see some of the sites along the Wall. Given the time we had, we couldn’t do both.

Sore and tired as we were, we decided to take a day to see Vindolanda and Housesteads forts, and the Roman Army Museum at Carvoran. We made the right choice.

Vindolanda Fort was one of the forts built before the Wall was put up, and therefore it’s a little off the Wall. It is one of the most famous of all Roman Forts because of a quirk in it’s history. 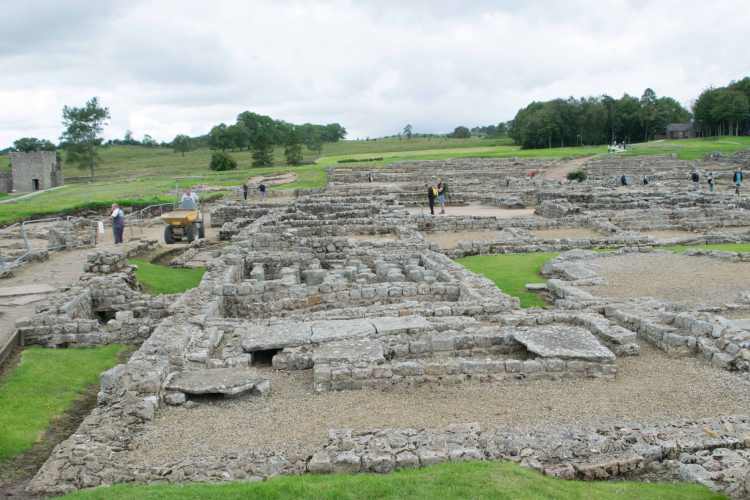 The Romans in Britain didn’t use paper much, it was far too expensive. Instead, they used thin sheets of wood to write on. Each of these sheets was about the size of a post card.

One of the things that made the Roman Army such a success was it’s organization. Along with organization comes bureaucracy. And along with bureaucracy comes record-keeping. The Romans kept records on everything — in quadruplicate. Vindolanda was no exception.

But in 105 AD, the garrison of Vindolanda was told they were being reassigned, probably to that other trouble spot in the Empire — Dacia, on the Danube.

When they got the orders to leave, they decided to clean out everything that wasn’t going to be needed. So they made piles of old stuff in the courtyard, and burned it. But when they were burning 500 of these wooden tablets, a rainstorm came along and put out the fires. The Romans were in a hurry, so they didn’t bother trying to burn them again before they left.

After a couple of months, maybe a year, another cohort was assigned to Vindolanda. They cleared off the rubble the first group left, and then covered it in clay and turf to level the site. The clay covered the tablets, sealing them in an oxygen-free environment. And there they stayed for 2000 years.

When they were discovered in the 1970s, the tablets gave a window into the lives of every-day people living in a frontier garrison. The most charming tablet deciphered so far is to the wife of the commander of Vindolanda, inviting her to a birthday celebration. But others are equally relatable — disputes among the people living in the fort, duty rosters, a request for more beer.

Housesteads Fort was equally interesting. The east gate of Housesteads is reputedly where we get the width of standard gauge rail lines.  The story goes that 4′ 8 1/2″ is just wide enough for a horse to pulling a cart to pass through. This width was used throughout the Roman Empire as a Really Useful Measurement.

When railroad tracks were first being laid during the Industrial Revolution, the width of the tracks was all over the place, meaning that different train lines couldn’t run on each other’s tracks. The story goes that a railroad engineer saw this gate, and proposed it’s dimensions as the “standard gauge” to be used by all railroads. No idea if this story is true, but at least now you know. 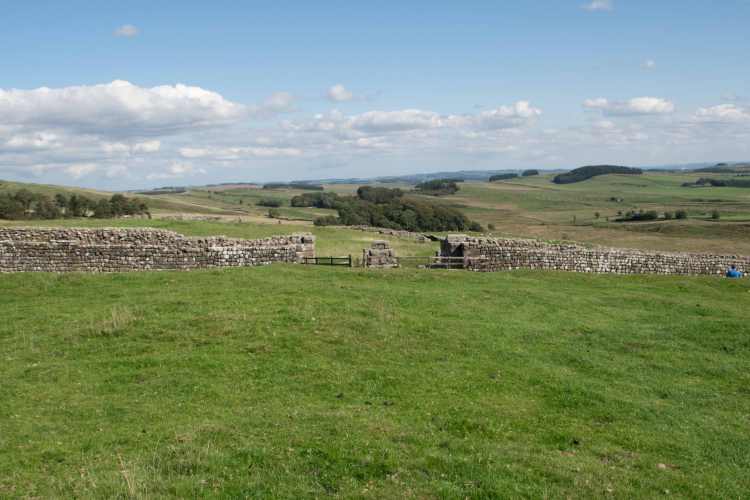 We made the right choice in taking the time to look at the forts and their museums. After enjoying the sites for much of the day, we picked up the Wall at the end of the Whin Sill, and the beginning of softer sandstone as a building material. Consequently, even where the Wall survives along this section, it has often been buried to protect it.

Instead, we were treated to a fabulous landscape in the evening light.

So ended our third day on the Wall.

3 thoughts on “Hadrian’s Wall Day 3: Once Brewed to Gilsland”