Our last day on the Wall. We started in some serious rain, the first that had fallen on us on the walk. 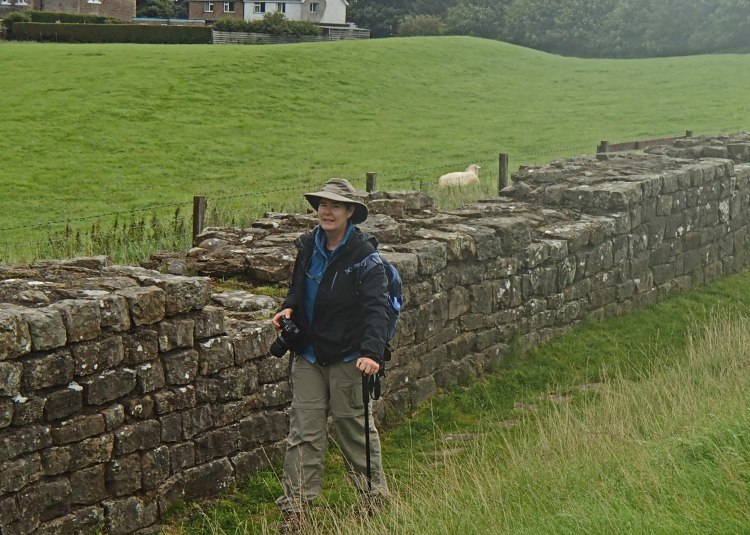 But with only 9 miles to go this day, we enjoyed the slower pace.

The most excitement we had during the day came when we ran across a couple walking with their dog. The dog was off leash, which is very much against the rule of walking through somebody’s pasture. But the woman thought it was hilarious that the “cows” thought the dog was a wolf, and would chase it. We were not so amused when we came across some steers, who did indeed chase the dog. The dog panicked and bolted towards the nearest humans — my husband and I. Five angry steers each weighing 800 pounds followed. With no time to run, I threw up my arm to make myself big and yelled at the steers. The steers stopped, and the disgruntled dog owners belatedly put a leash on their dog.

But the livestock continued to be very blase about hikers. This herd has their favorite spot to lie in, and the hikers can darn well go around them.

From near here, we turned south to Brampton, and another old fabulous bed and breakfast above a pub.

Random Thoughts With Which to End Our Hike:

Walking Hadrian’s Wall was a fabulous experience. Seeing the ingenuity of the people in building their forts and walls made us remember that although they may not have been as technologically advanced as we are, they were not stupid. They came up with lots of creative “ahead of their time” solutions, using nothing but wood, leather, stone, iron and sweat.

Seeing their frustrations made the people of that time much more real. We could hear the men swearing as they tried to get that boulder at Limestone Corner to move, because we’ve had the same emotions ourselves. Reading their notes left at Vindolanda showed us their daily lives, that in many respects were very similar to our own.

As we’ve walked behind and across a lot of these little farmsteads, it’s been a little mind-boggling that many of these families have been in the same area since the Norman Conquest, and very possibly since the Romans, or even before. Cultures change, but the people remain the same. None of the places we stayed after Edinburgh was built more recently than 500 years ago. One of the pubs received their charter to sell beer in 1190 from King David of Scotland. That kind of continuity is, again, mind-boggling, and a little reassuring in this time of political and social disruption.

The people we have met have been unfailingly nice, patiently helping us out when we were lost or confused. We thank them from the bottoms of our hearts for sharing their home with us.